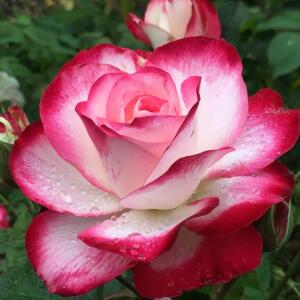 “In life we have pleasures with our loved ones, we have sorrows and joy; but thank God for the memories death cannot destroy” Again death has invaded the ranks of the Hines and Lloyd family, carrying away our beloved daughter, grandmother, sister, aunt, niece, cousin and friend, Rosie Marie Hines.

Rosie attended Boyton (Bull Dogs) Elementary School, Benton Harbor Jr. High, and graduated from Benton Harbor High School in 1974. After graduating she attended Lake Michigan College, following her high school sweetheart, basketball player, James Boyd.   She then followed James Boyd to Edenborough State College in Pennsylvania.  Upon arriving on campus, she met Michael Taylor.  Rosie and Michael’s relationship grew and resulted in the birth of their only child, the late Michquel Hines-Taylor.   From there, Rosie attended Arizona State University.  She was always considered one of the brighter Hines.

Rosie returned to Benton Harbor in the early 80s. She worked for Benton Harbor Area Schools and Whirlpool Corp.  Rosie met Darryl McClinton and shared a beautiful relationship for nearly 30 years.  Together they helped rear Michquel’s children, especially her oldest grandchild, DeAnthony, and second grandchild, DeVawn.  Rosie life forever changed after the passing of Darryl in 2020.

To know Rosie, you’ve met genuine love. Rosie was very generous and was always giving of her substance.  She loved to talk and never lost a debate unless she was speaking with another Hines.  Those conversations ended in stalemates.

Rosie accepted Christ as her Lord and Savior at a young age and was baptized by the late Pastor C. M. Jones Sr. at Beautiful Gate Baptist Church in Benton Harbor MI.  Train up a child in the way he should go; and when he is old, he will not depart from it. Proverbs 22:6. Rosie’s father, the late Rev. Joe Hines served as the Pastor of Pleasant Grove Baptist Church; where she often found her way to the church to hear her mother sing and her father preach a sermon. She later reconfirmed her faith and was baptized by Pastor Bill Bubar at the EFC Chapel in St. Joseph, MI.

To send flowers to the family or plant a tree in memory of Rose Marie Hines, please visit our floral store.