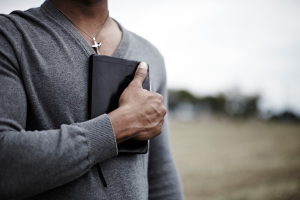 It's not death to die, to leave this weary road, and mid the brotherhood on high. To be at home with God, it's not death to close the eyes long dimmed by tears, and to wake in glorious repose, to spend eternal years it's not death to fling aside this sinful dust and rise on strong exulting wing, to live among the just. Jesus thou Prince of life, thy chosen cannot die like thee, thy conquer in the strife to reign with thee on high.

Elder Larry McCoy was born on January 27, 1950, in Ridgely, Tennessee. He was the son of the late Mr. Willie C McCoy and Mrs. Clara (Thompson) McCoy.

Larry and Nellie were married on June 3, 1989, and under their union raised 3 loving grandchildren Clarence, Jasmine, and Janetta.

Larry adored helping the kids in his neighborhood. He would often come home to groups of kids waiting on him to fix their bikes and teach them mechanical skills, followed by a game of community baseball which he would often lead. Larry loved working on his many projects. He never strayed far from his upbringing. Larry was a die-hard Chicago Bull’s fan.
Elder Larry McCoy was known for his infectious smile and laughter. He loved spending time with his family and friends. To be absent from the body is to be present with the Lord Elder Larry McCoy departed this life on May 25, 2022.

To send flowers to the family or plant a tree in memory of Elder Larry McCoy, please visit our floral store.

A Memorial Tree was planted for Elder Larry